Collaboration in ethnographic research is on the agenda under current conditions of knowledge making. Yet social researchers mostly insist on their monopoly on production of primary sources and keep their archives closed. Meanwhile open digital publishing of research results, where representation of data is inseparable from its analysis, is gaining recognition as most fit to both intellectual and public expectations. When interview transcripts are published openly on-line, our field counterparts cannot be deprived of the right to control their contents anymore. The Obninsk project agenda includes creating an open on-line digital resource representing the results of field research on a local variation of big Soviet science. The perspective of open publishing the in-depth biographical interviews with professionals from a Soviet nuclear center made us introduce the stage of transcript approval (authorization) in our fieldwork.

The proposed paper intends to share field experiences of the four Obninsk project members engaged in the authorization experiment: brief email exchanges or short meetings to receive an authorized transcript, almost untouched, and days-long negotiations over every single detail, lectures about naturally occurred speech and methods of contemporary qualitative analysis, and informants’ attempts to make their own use of our research, reading aloud sessions for the visually impaired informant flowing into discussions and new interviews, and, eventually, working through corrected transcripts coming as edited Word-files or printed papers all scribbled. However, these various forms of cooperation still seem distant from co-authorship. “Co-authorization” is meant to describe and conceptualize the challenge to the conventional practice of archiving transcripts and change of the local moral order of our interdisciplinary research team. 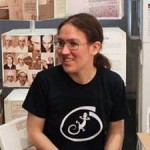 is an anthropologist employed as a junior researcher at Peter the Great Museum of Anthropology and Ethnography (Kunstkamera) of the Russian Academy of Sciences, and a researcher in the Obninsk digital project. She is currently working on the dissertation about oral memories of the Perestroika age. Her research interests include field ethnography, cultural analysis of oral discourse, and digitalization of qualitative data 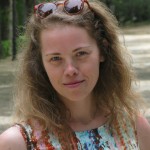 is an anthropologist interested in historically grounded and ethnographically driven research of post-socialist societies. Her academic background includes training in history, anthropology, and science and technology studies acquired at the European University in St Petersburg, Université de Neuchâtel and UC Berkeley. She has participated separately in research projects focusing on post-Soviet memory and on techno-scientific communities in the former USSR. Her field of interests includes anthropology of knowledge and technologies, political anthropology, media and communications, subjectivity and the post-Cold war condition. She is currently finalizing her PhD thesis on DIY in post-Soviet Russia at the University of Neuchâtel.

Roman Khandozhko is a research fellow at the Institute for Eastern European History and Area Studies, University of Tübingen. He is a member of the collective project ‘Nuclear Technopolitics in the Soviet Union’, and concentrates currently on the history of the nuclear research centres in Dubna and Obninsk. Roman holds a PhD (kandidat nauk) in history awarded in 2010 at the South Federal University (Rostov-on-Don, Russia). His research addresses social and political networking in the late Soviet Union and post-Soviet Russia; intellectual anthropology of Soviet intelligentsia; and politics of history in the Soviet and post- Soviet context.